On June 11, 2019, Peter the Great St. Petersburg Polytechnic University and the Leibniz University of Hannover marked a new milestone in the development of their many-year interaction. At the ceremonial Plenary Session, the universities celebrated the 35th anniversary of cooperation and signed a new agreement on strategic cooperation. 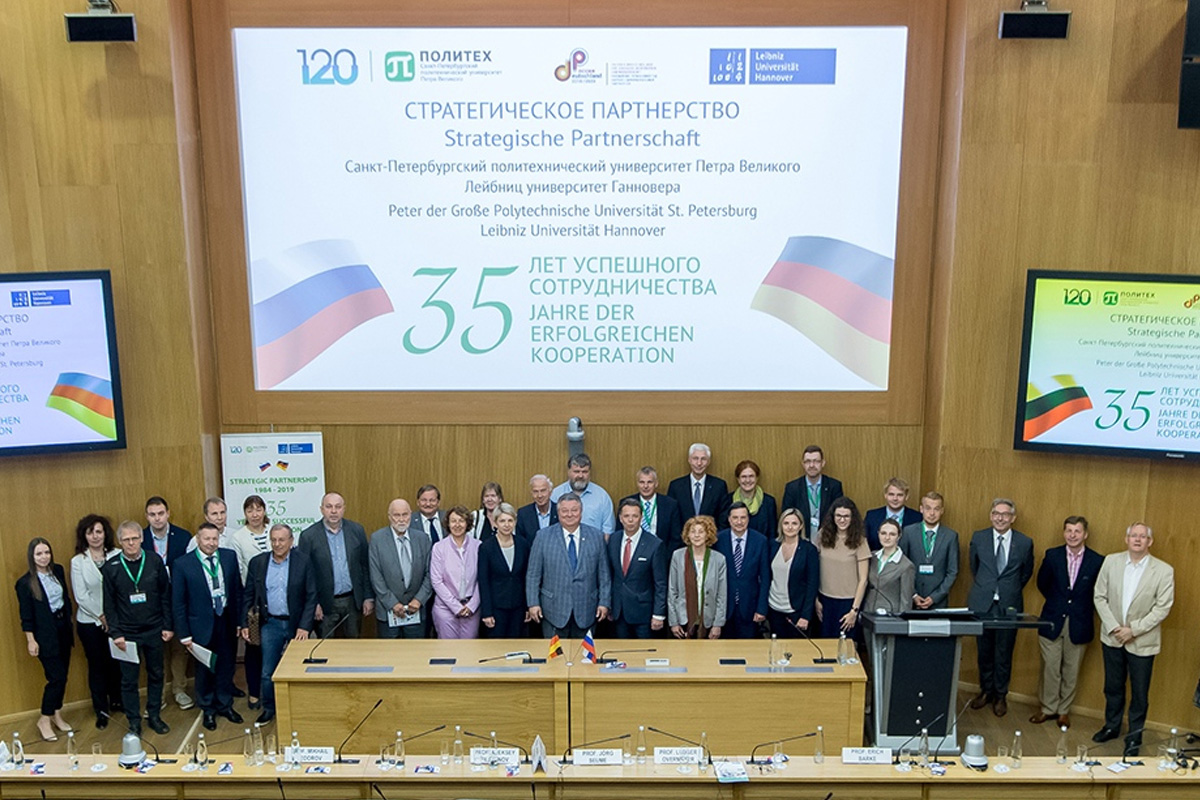 The substantial German delegation consisted of the President of LUH, Professor Volker EPPING, the former President of LUH, Professor Erich BARKE, Vice-Rector for International Activities of LUH, Professor Christina von HAAREN, Director, Professor and Postgraduates of the Institutes. Ms. Beate KOLBERG, Head of the Information Bureau of the German Academic Exchange Service (DAAD) in St. Petersburg, also took part in the Plenary Session. Welcoming the guests of honor, Rector of SPbPU, Academician of the RAS Andrei RUDSKOI noted that it’s been already 35 years that the two universities have been moving in the same direction, overcoming barriers and obstacles together, and achieving their goals together. 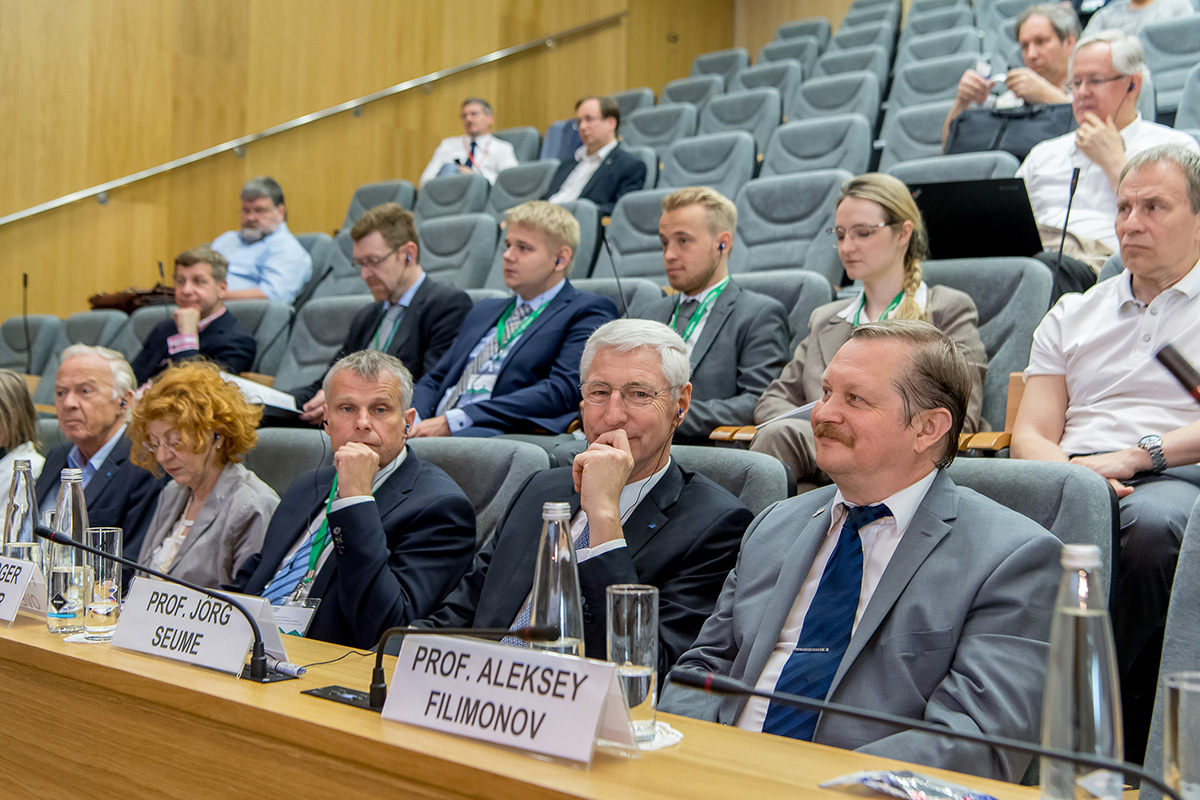 “Our outstanding predecessors, the former SPbPU rectors, Academicians of the RAS Yury S. Vasilyev and Mikhail P. Fedorov, and the former President of the Leibnitz University of Hannover and its former president Professor Erich BARKE stood at the origins of this cooperation. The heads and scientists of our universities have made a great contribution to the development of our cooperation,” stressed the SPbPU rector. 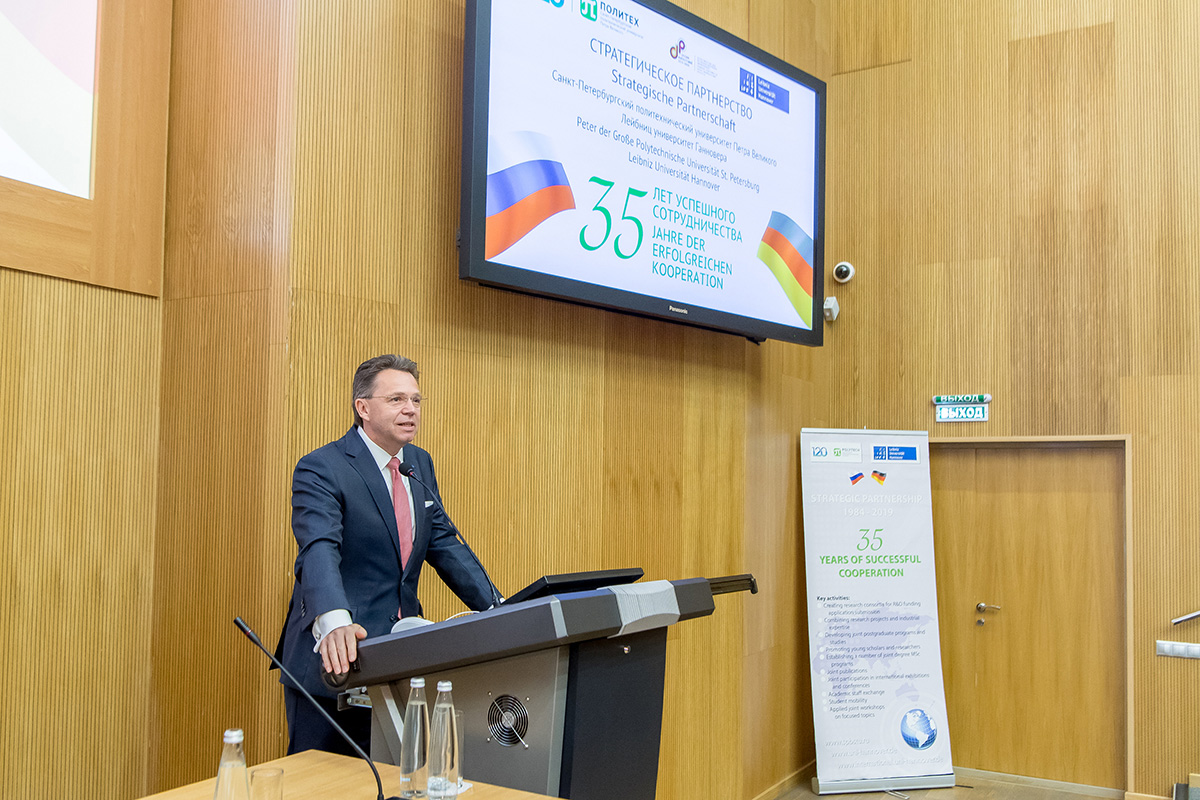 On behalf of the German university, the President of LUH, Professor Volker Epping, greeted the participants. He noted that the 35th anniversary of the cooperation of SPbPU and LUH is held under the auspices of the Russian-German Year of Scientific and Educational Partnerships.  The initiative got support at the governmental level: the Russian-German Year of Scientific and Educational Partnerships 2018–2020 was opened by a joint statement of the German Federal Minister for Foreign Affairs Heiko MAAS and the RF Minister for Foreign Affairs Sergey LAVROV. “Our collaboration began in lean times for both countries, and our goal was to unite the scientific community of the two countries, to give them new opportunities, to encourage scientists and researchers to better understand each other,” said the LUH rector. And to a big extent, Russian and German universities have succeeded in this: as noted by Ms. Beate KOLBERG, SPbPU and LUH created a bridge of live communication between St. Petersburg and Hanover, while the “Strategic Partnership” project within the frame of DAAD  became a direct evidence to the international scientific communication of the highest probe; not once, it has been recognized as one of the best in European practices. 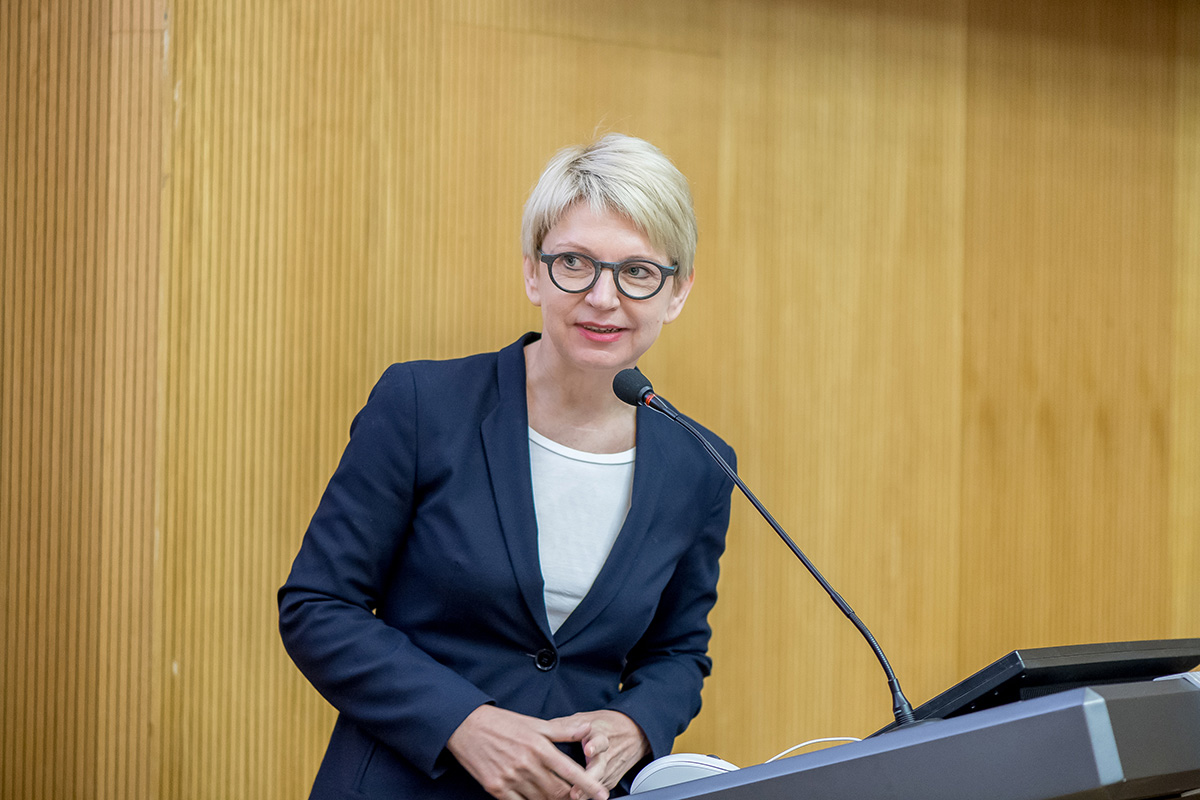 SPbPU and LUH have many joint victories on their accounts. Today, 14 scientific groups in which the best specialists from both universities are involved actively collaborate. Cooperation develops in the fields of nanotechnology, laser technology, energy, information technology, civil engineering, new materials and additive technology, as well as in the fields of Life Science, economics and humanities, library science. In addition, universities implement joint educational programs; double and triple diploma Master’s degree programs in energy, economics, and intellectual systems are among them. Scientists and employees of both universities are in constant search for new solutions: in the modern world, it is very important that not only Bachelor’s and Master’s degree holders but also young scientists would submerge themselves into the world of intercultural communication, participate in international projects and offer entirely new solutions. That is why a double postgraduate agreement was recently signed between the universities. And the results are already there.

“Literally a week ago, in the joint dissertation council with the participation of professors from our universities, professor OVERMAYER, professor ZEYME and professor SKODYREV, postgraduate student Nikita SHEKUTIN successfully defended his dissertation at the Leibniz University of Hannover,” said Vice Rector for International Relations D.G. ARSENYEV 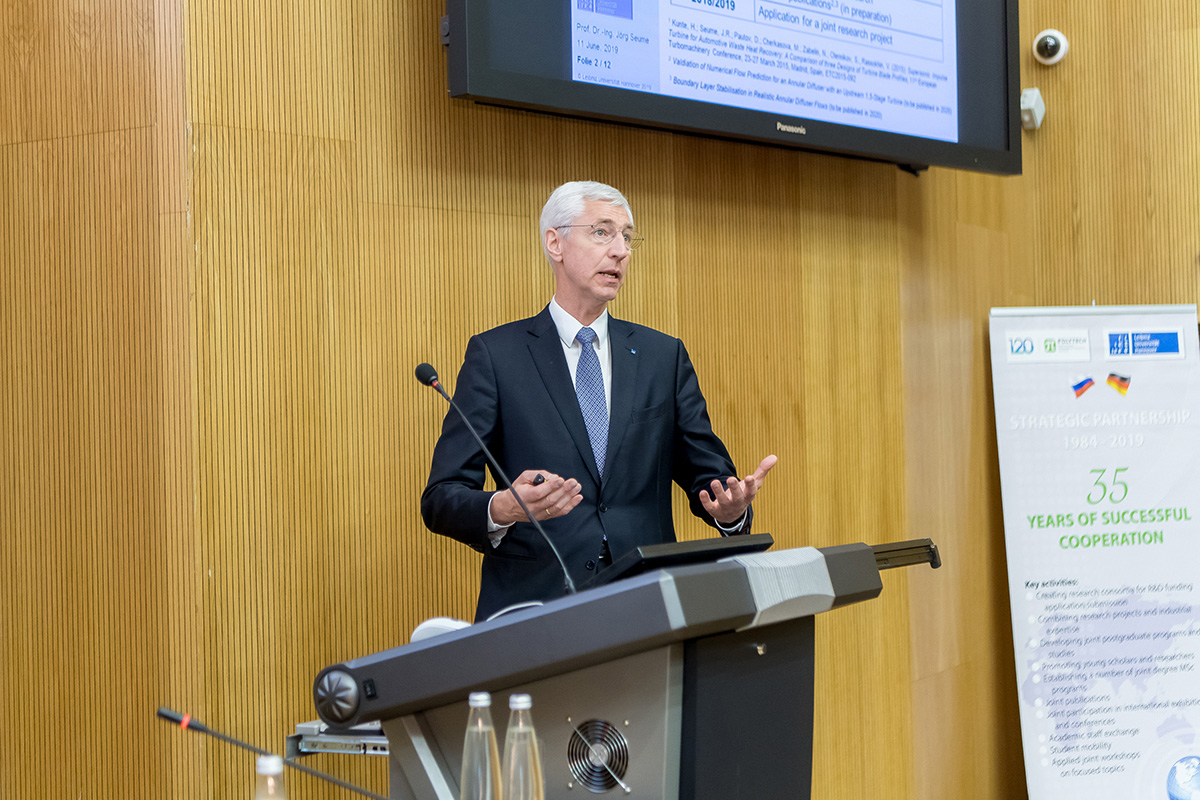 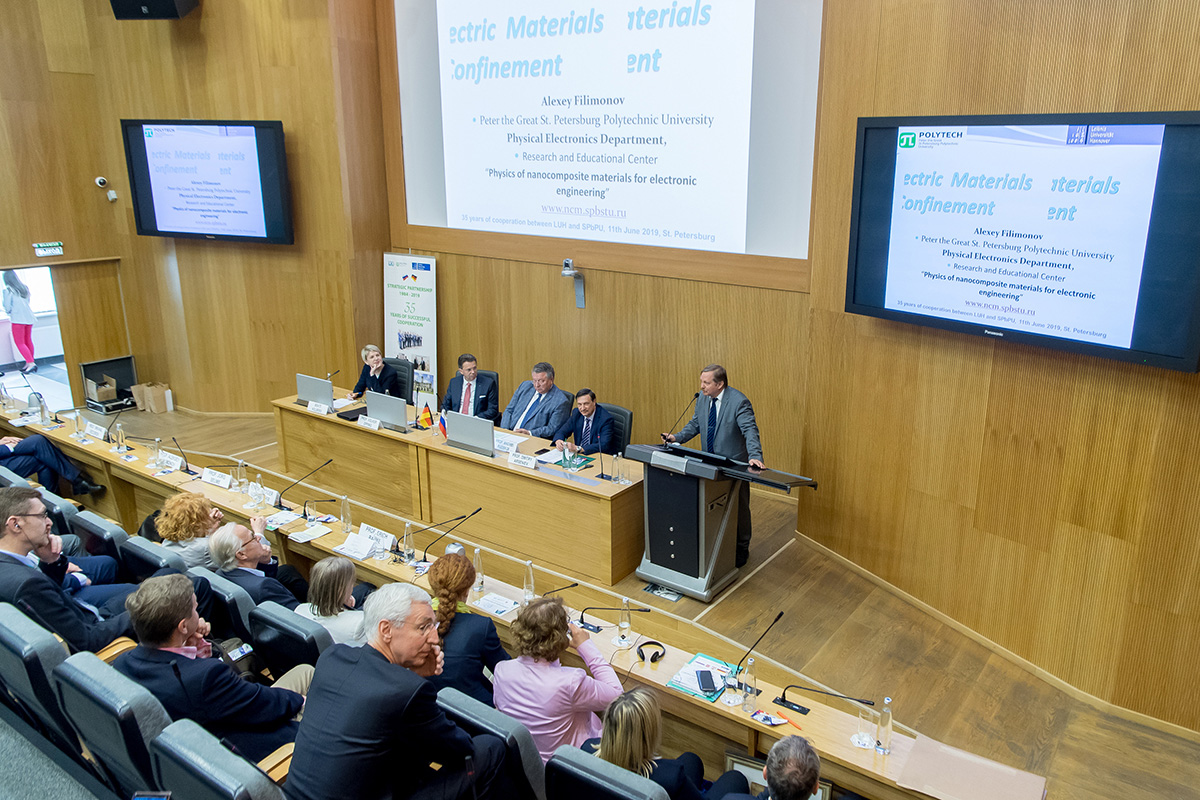 Professors of LUH and SPbPU also presented the results of the work of their research groups at the Plenary Session. Director of the Institute of Turbomachines and Fluid Dynamics of LUH, Professor Joerg R. SEUME, Head of the Institute of Transport and Automated Technologies of LUH, Professor Ludger OVERMEYER and Professor of SPbPU, Head of the Physical Electronics Department, Alexei FILIMONOV, made reports on their research activities and shared their plans for the future. Within the framework of the intensive agenda of events on the occasion of the 35th anniversary of the inter-university partnership, scientists of SPbPU and LUH will participate in two international conferences: “Cyber-Physical Systems and Management” and “Power Engineering and Electric Motors 2019.” They will also take part in the international seminar on internationalization “Digitalization of Universities.” 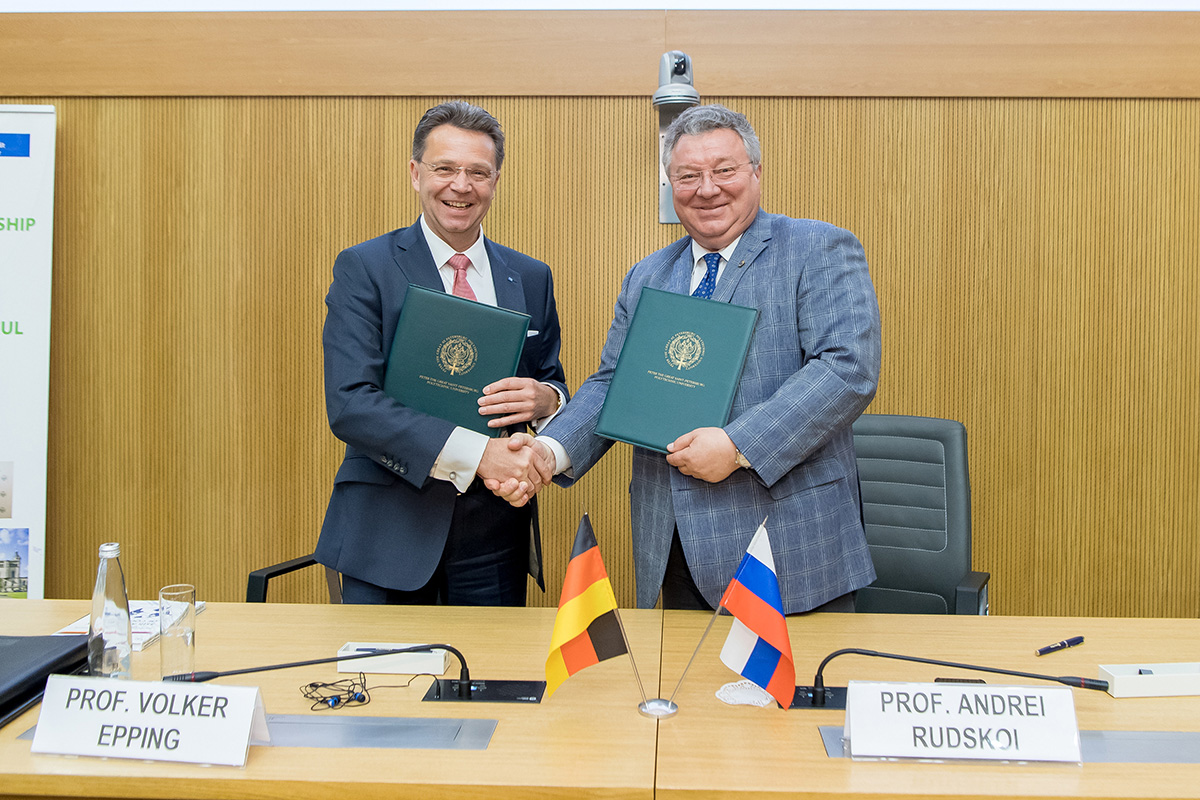 The plenary session continued with the signing of a new strategic partnership agreement and a cooperation roadmap between SPbPU and the Leibniz University of Hanover for the next three years. The document was signed by the rector of SPbPU, academician of the RAS Andrei RUDSKOI and the President of LUH Professor Volker EPPING, who on the eve of this day became Honorary Doctor of Polytechnic University. After that, a no less solemn ceremony took place: on behalf of the head of the German university, Professor EppING assigned the title of Honorary Senator Leibnitz of the University of Hanover to the rector of SPbPU. And after that, the president of LUH made and unconventional gift to Polytechnic University:

«Scientific cooperation between our countries began more than 300 years ago. Gottfried Wilhelm Leibniz, after whom our university was named, met several times with Russian Tsar Peter I. These meetings were of great importance: they laid the foundation for the creation of the Academy of Sciences in St. Petersburg, and Leibniz also proposed a research project in Russia related to its unique geographical location. Peter I awarded Gottfried Wilhelm Leibniz the title of Privy Councilor of Justice. And today, we are giving Polytechnic University a facsimile copy of the order of the Russian Tsar to assign Leibniz this title,” President of LUH handed the precious historical document to SPbPU rector, who assured that it would occupy an respectable place of the Museum of Polytechnic University. 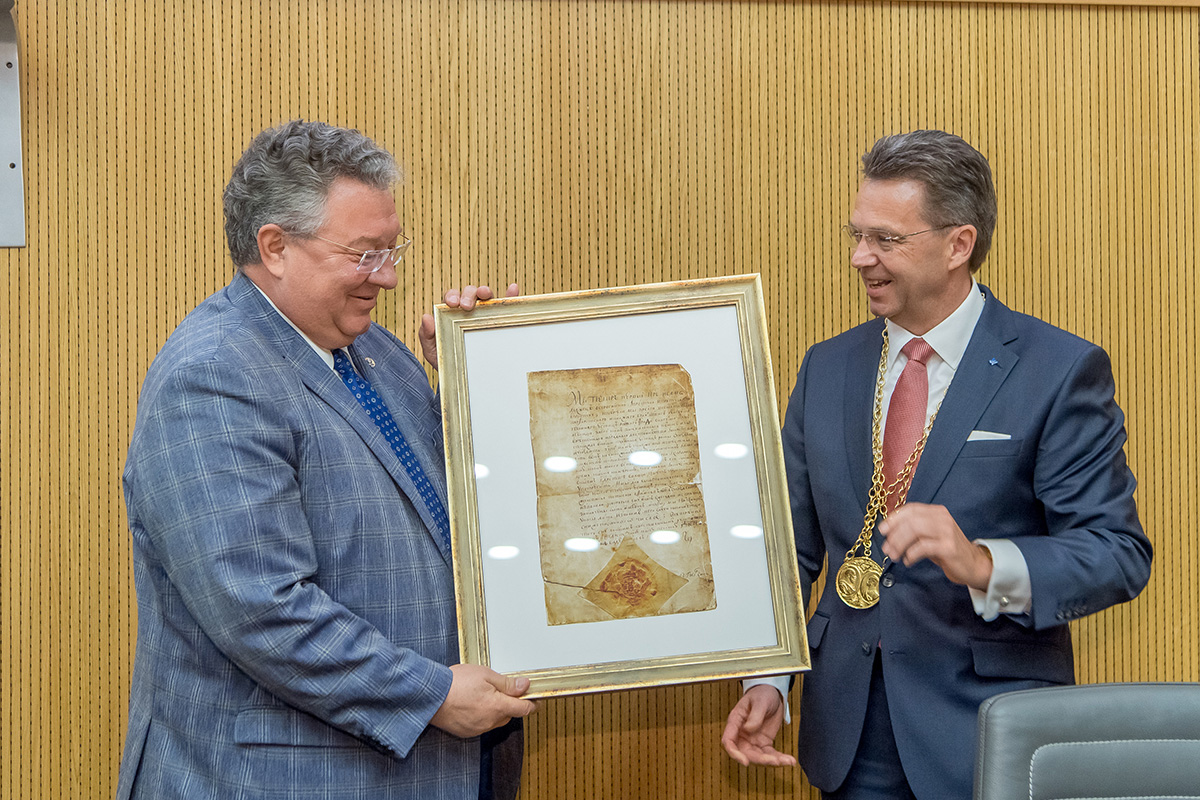 Summing up the meeting, the leaders of SPbPU and LUH expressed hope for the continuation and expansion of the fruitful partnership of the two universities. As a memento of the anniversary, members of scientific groups and delegations received collections of joint research papers of Russian and German scientists.