The Polytechnic Team Has Circled the Globe

The circumference of the Earth is 40 thousand kilometers. Since the beginning of the year, the team of Polytechnic University international services and institutes traveled to present our university at various international exhibitions, making a total of 43,129 km. China, Pakistan, Finland, Turkey, Kazakhstan, Tajikistan, Uzbekistan, the Kyrgyz Republic, Malaysia, Morocco, Germany: this is only part of the list of countries in which multi-format exhibitions and meetings for students and partners took place. It looks like the Polytechnic staff has a chance to circle the globe twice by the end of the year, but for now, we are sharing with you the brightest moments from past events. 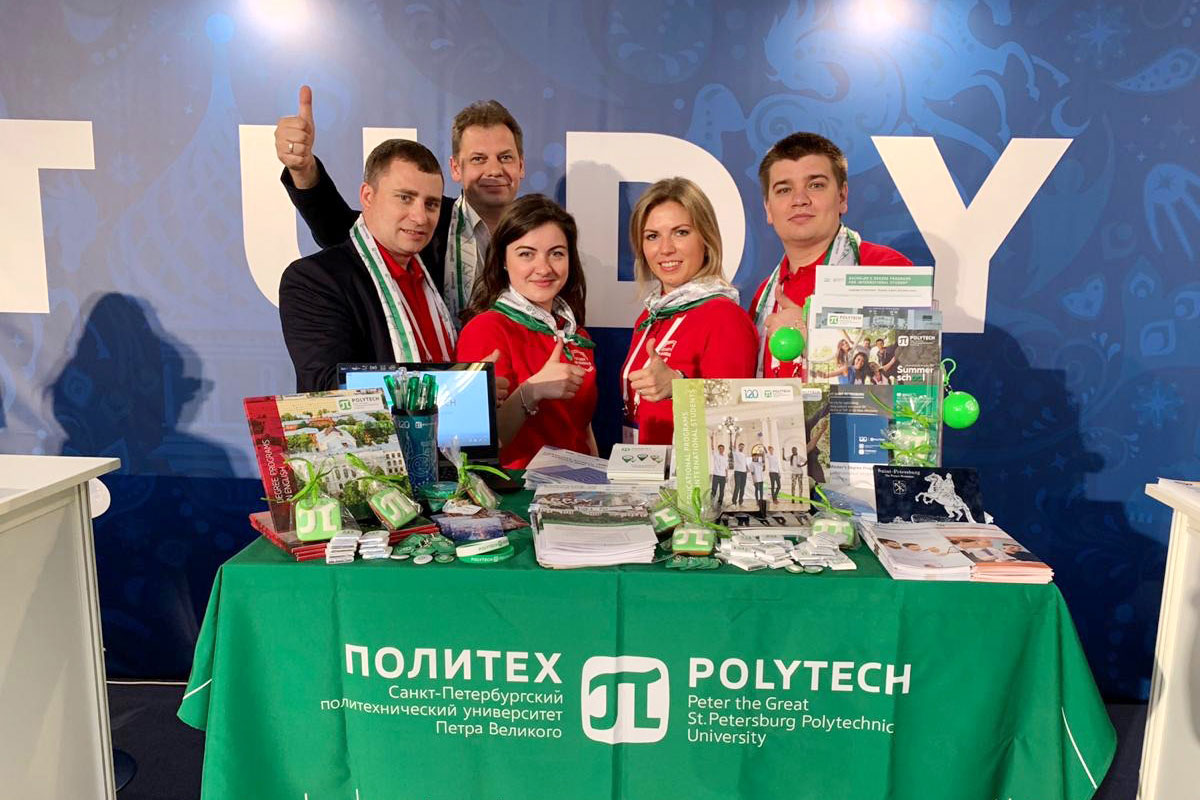 In the 20s of May, an international exhibition was held at the Russian House of Science and Culture in Berlin (RHSC) with the support of Rossotrudnichestvo, which brought together educational institutions from Norway, Czech Republic, the United States, South Africa, the United Arab Emirates, Sweden and about 15 more countries. Russian universities were represented in a single booth “Study in Russia.” Many participants prepared extensive programs; for example, the Polytechnic team complemented the presentation of educational programs with a fascinating quest and cooked gingerbread cakes with the university logo to treat the exhibition visitors. Traditionally, SPbPU international educational programs raised significant interest of the audience. Potential foreign applicants asked many clarifying questions about the possibilities to study for a semester. Based on the results of the exhibition, a round table was held for the participant universities, where the strategy of joint actions of the RHSC in Berlin and leading Russian universities for bettering actions in popularization of Russian education in Germany was under discussion. 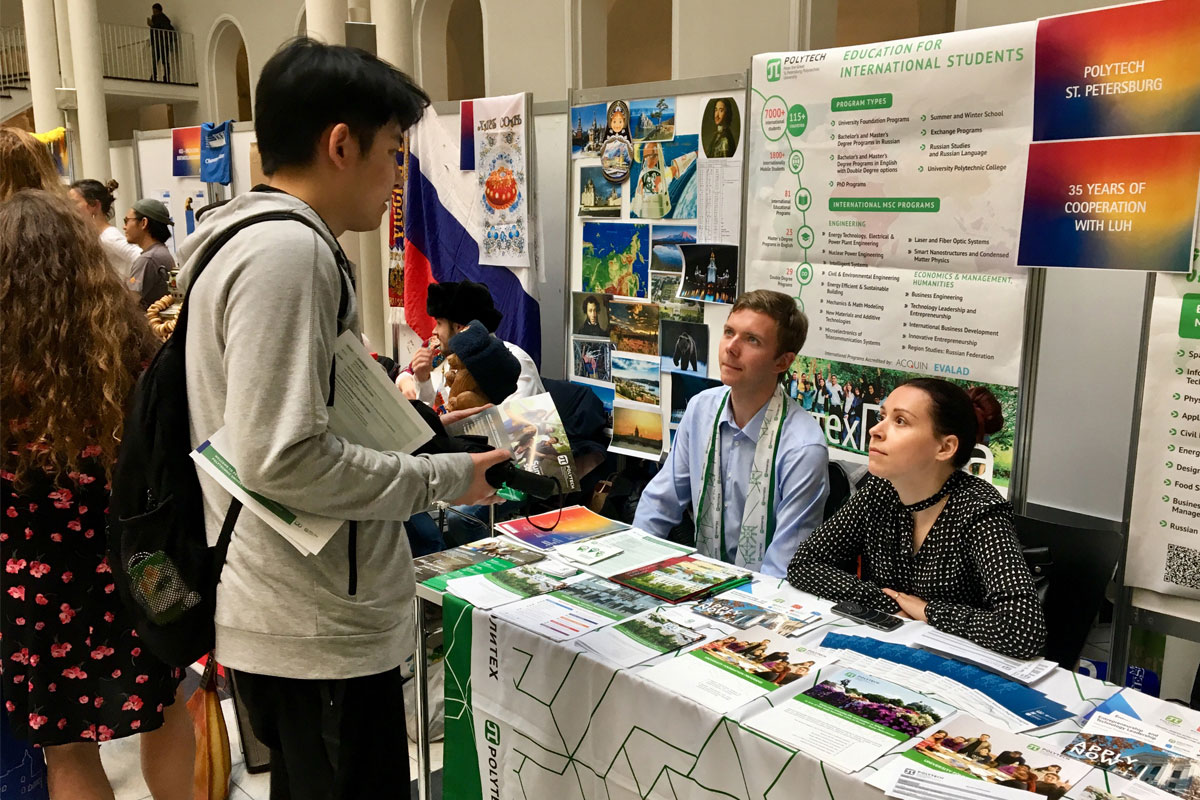 The festival “Days of Europe”, which started last spring in Germany, traditionally lasts for more than two weeks. In mid-May, a team of the Higher School of International Educational Programs joined the foreign colleagues. Its employees took part in the International Day, which was held in the main building of Leibniz University of Hannover.  International students of the German university represented their countries, treated visitors to national dishes, conducted quizzes and entertained with folk games. Polytechnic University was presented by a stand-alone mount, emphasizing the importance of the relationship between the two universities. Let us remind that this year SPbPU and the University of Leibniz celebrate the 35th anniversary of cooperation. At the exhibition, everyone could get detailed information about studying at SPbPU and learn something about culture and life in Russia.

The employees and students of LUH got better acquainted with our country the next day: special courses of accelerated study of the Russian language, held by senior lecturers of the HS IEP I.I. BARANOVA and M.Yu. DOTSENKO, were organized. The course entitled “The Russian language: it is easy” brought together exactly 30 participants - from students to the president of LUH Professor Volker EPPING. In the evening, one of the most romantic films about St. Petersburg, “Peter FM” was demonstrated with a subsequent discussion on it. 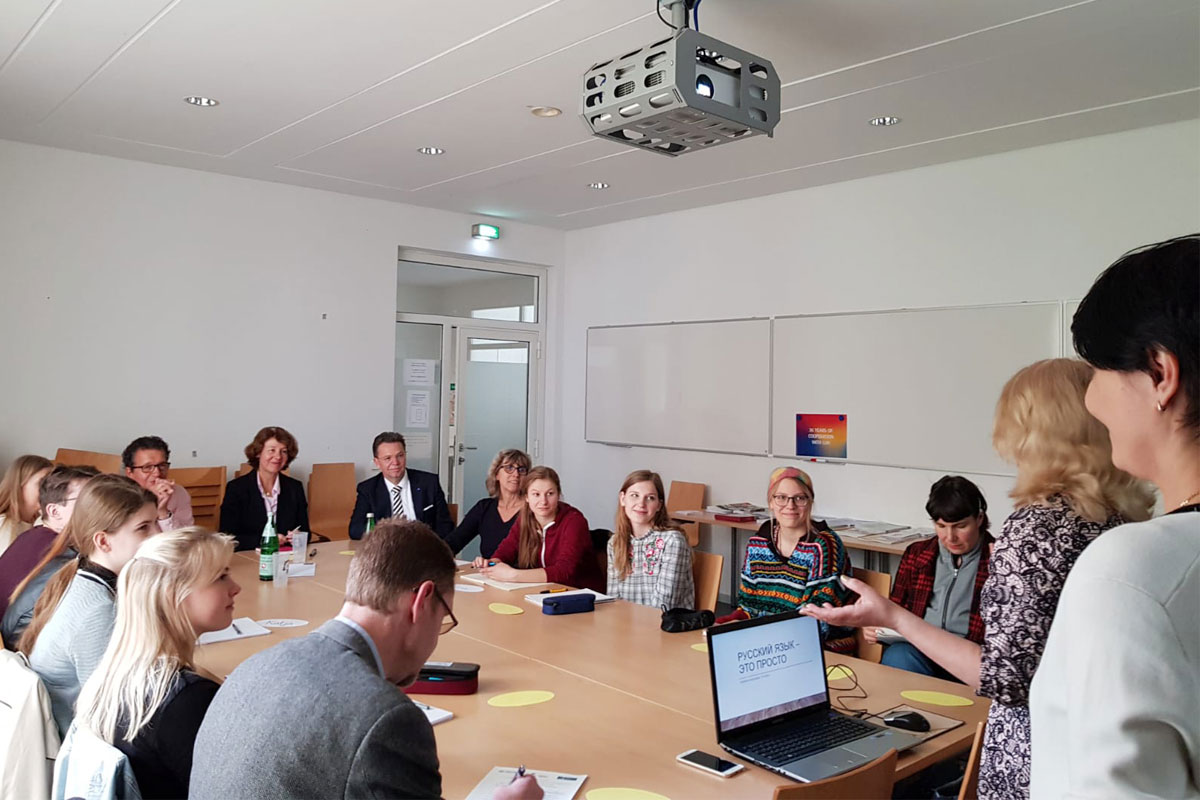 Morocco: a country of unforgettable traditions

The “Student Forum - 2019” International Educational Exhibition, held in the economic capital of the Kingdom of Morocco, Casablanca, brought together over 500 higher education institutions from 20 countries of the world, including higher education institutions from France, Switzerland, Belgium, Spain, Ukraine, Egypt, Tunisia, Turkey and others. The event, which was held with the support of the Ministry of Education of the Kingdom of Morocco, was attended by representatives of the RF Embassy and Consulate in Morocco, leaders of Rossotrudnichestvo, vice-rectors and heads of departments for international cooperation of Russian universities. The Russian universities, represented on a single mount, were sponsored by Rossotrudnichestvo and RACUS. 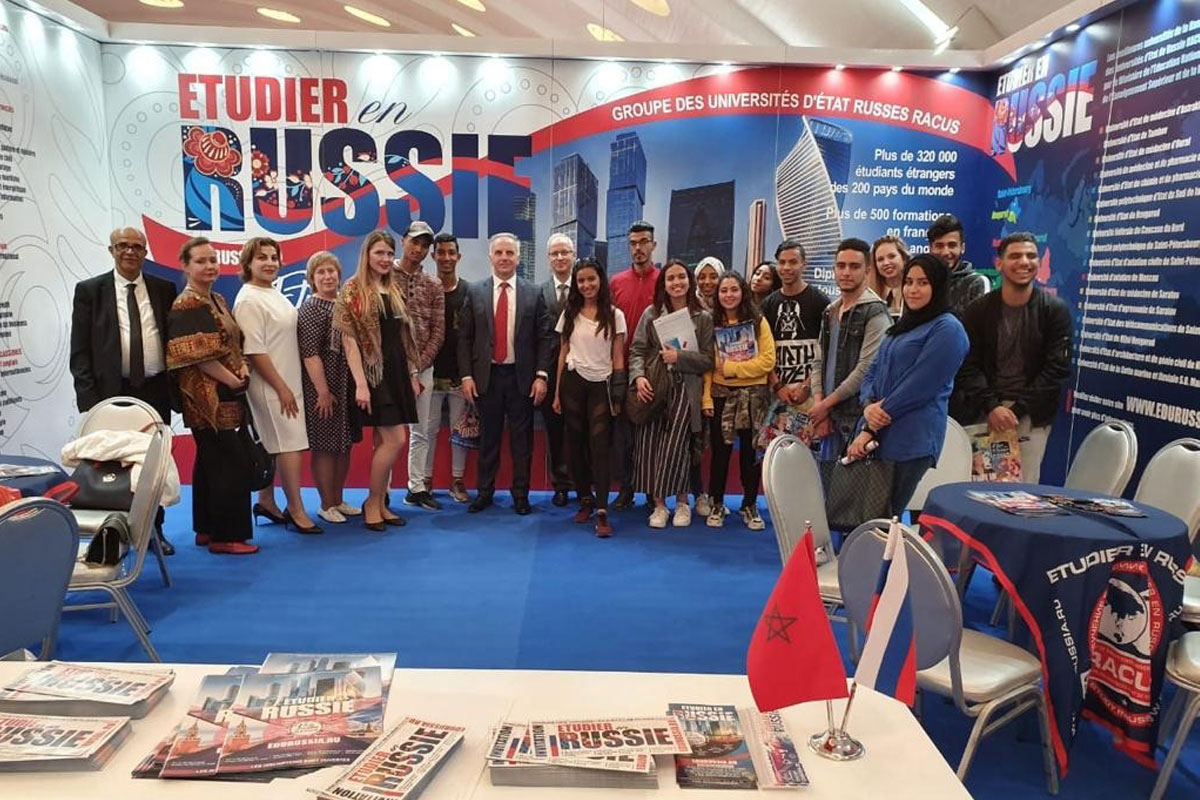 Moroccan students showed great interest in Russian higher education. They got a chance to learn something about Russian culture and the possibilities of studying abroad. The Kingdom today has a strong demand in trained specialists of medical, engineering and economic specialties and IT technologies.

Students from the Kingdom already study at Polytechnic University; many of them actively defend the honor of the university in various competitions and contests. An IIMET student from Morocco Itri HANAA received the 1st degree diploma for the best presentation at the All-Russian round table of international graduate and postgraduate students, which was held at Tomsk Polytechnic University last April. In the end of May, Itri and other talented Polytechnic students were greeted by the rector of SPbPU, Academician of the Russian Academy of Sciences A.I. RUDSKOI at the Academic Council.

Polytechnic University in the CIS countries

Polytechnic University has been very active in promoting its educational services in the CIS countries: with the support of colleagues from Rossotrudnichestvo, our university participated in the 20th Kazakh International Education and Career Exhibition and the 8th International Russian Education Fair in Tajikistan. Both events have also got support from the ministries of education of their states. A SPbPU delegation attended one more exhibition, i.e., “Education and Career,” in Uzbekistan. In total, in the CIS countries representatives of Polytechnic University signed preliminary agreements with more than 350 potential applicants, and over three thousand people visited our university’s stands. 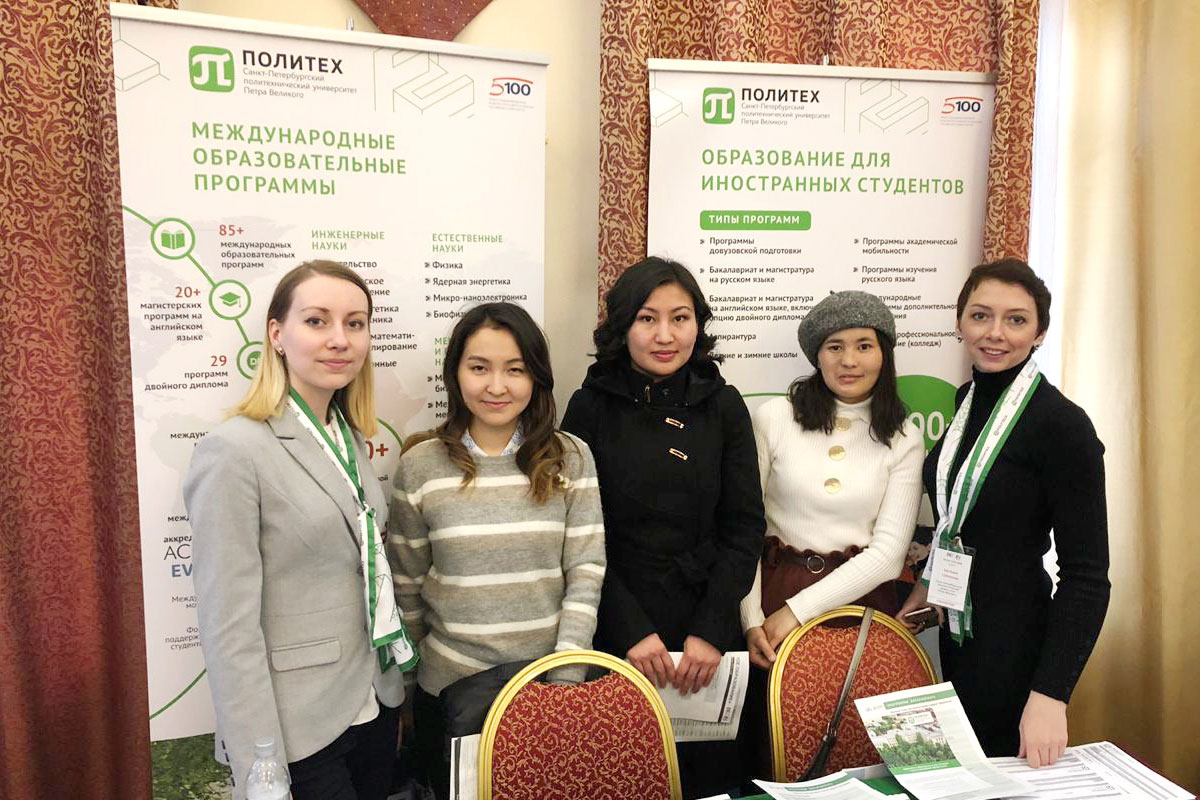 “At international educational events which Peter the Great Polytechnic University participates in, we always receive support from our colleagues from the Ministry of Science and Higher Education of Russia, the Ministries of Education of the host countries, Rossotrudnichestvo, embassies and consulates of the Russian Federation worldwide. I would also like to note the invaluable contribution to the meetings of our partners and recruiting companies. This is essential and vital, and allows us to develop well in the international educational space,” stressed the Head of the International Education Department Ye.V. SATALKINA.