SPbPU Cooperation with Chinese Partners: the History in People

Relationships between China and Russia have been gaining fundamentally renewed value in recent years. Their distinguishing features are confidence, readiness to attentively consider partner's interests, and greater openness. These tendencies are reflected in scientific and educational policy of Peter the Great St. Petersburg Polytechnic University. 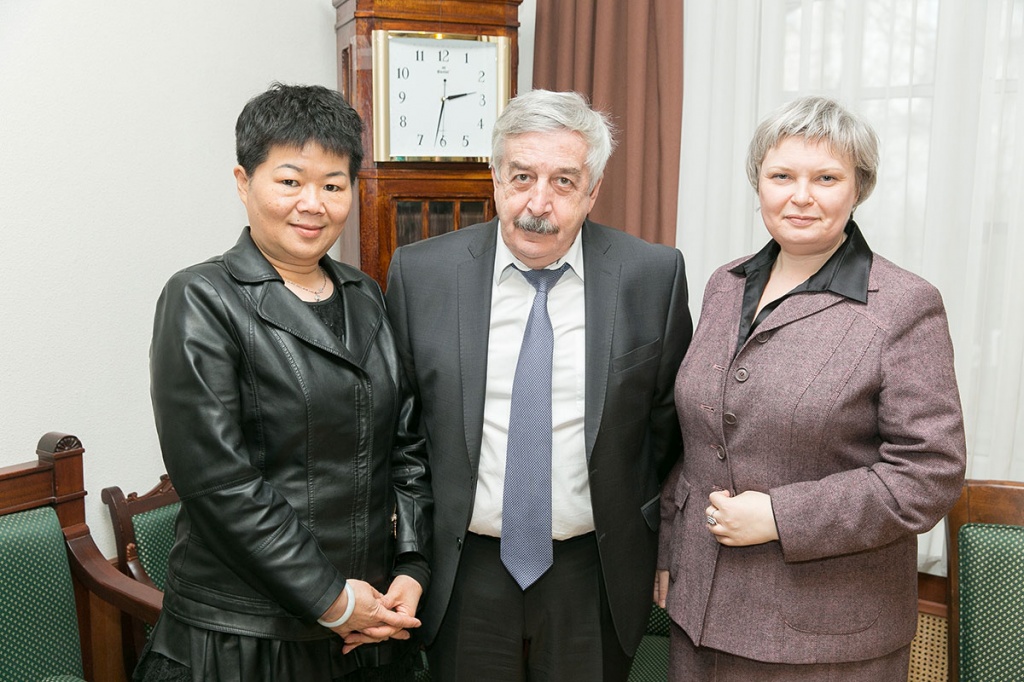 Polytech has been cooperating with Chinese universities for more than half a century. But behind declarations and agreements on "mutual cooperation" there have always been and are specific people. They are our Chinese graduates, each of them is now maintaining "cohesion" between our countries, and current students from China,who have already put their names into the history of our university. 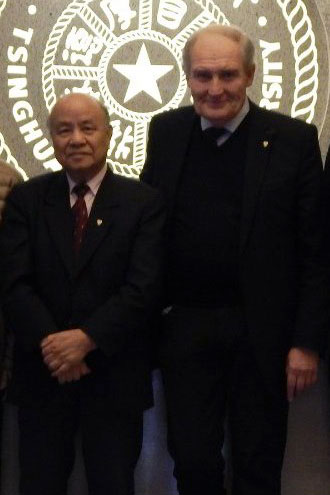 Opening of the SPbPU office in one of the largest China's cities – Shanghai – took place last week. Our university became the first and the only Russian university to have a representative office in China. Rector of SPbPU A.I. Rudskoy called this event "an absolutely new phase of relationship with our Chinese counterparts" and the main goal he called supporting and extending scientific and research, educational, and cultural cooperation between our countries. In this sense the International Scientific Conference "The Arctic: the History and the Present", which was held in SPbPU and also included participation of Chinese counterparts, is also supposed to maintain expert dialogue on the relationships between Russia and China. Scientists and specialists of different fields of knowledge took part in it, including Executive Director of the Institute of Strategic Partnership between China and Russia of Tsinghua University (Beijing) professor Wang QI.

After the report, that was presented by Wang Qi at the conference and that analyzed strategies of the Chinese-Russian cooperation in the Arctic, the professor talked to the senior vice-rector of SPbPU V.V. GLUKHOV. Doctor of History, professor of the "History" Department of SPbPU Institute of Humanities S.B. ULYANOVA also participated in the meeting. It must be noted that in 1995 Wang Qi finished post-graduate studies in the Polytechnic University and defended the Ph.D. thesis at the "History" Department. "The Polytechnic University gave me a deep feeling to Russia. Especially to Saint Petersburg – since I studied here, it is like my second homeland," – said Wang Qi. But the most important is that S.B. Ulyanova and Wang Qi had the same research supervisor – Raisa Vasilyevna Degtyareva. In this connection, their areas of academic interests are the same and long-term cooperation, in their common opinion, is far-reaching. 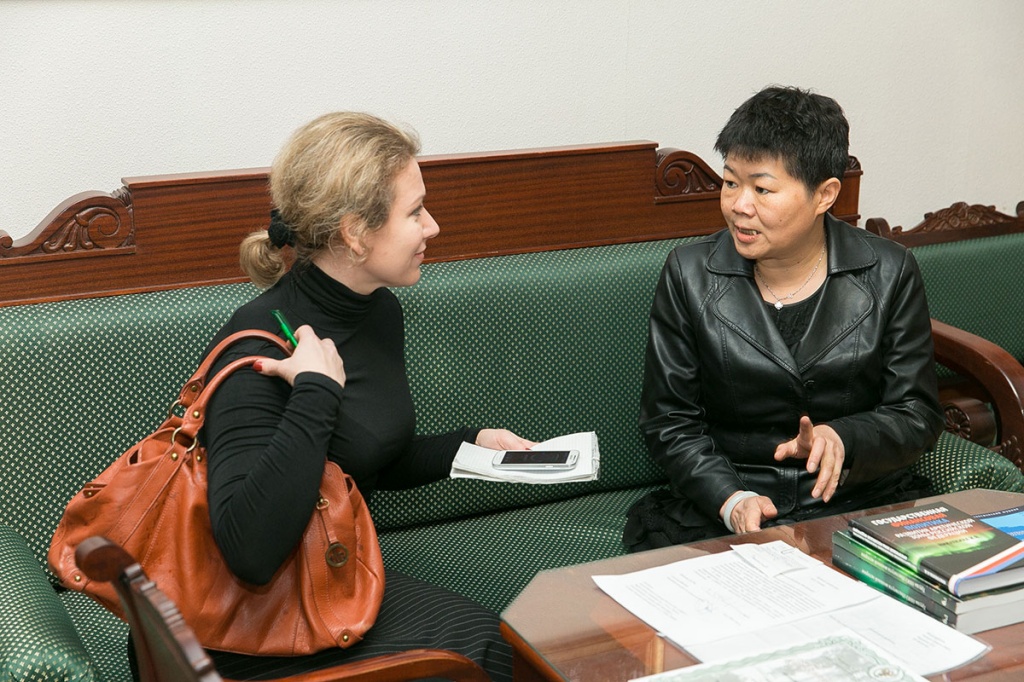 Talking about the implemented projects, Wang Qi reminded about the most global of them – the Institute of Strategic Partnership between China and Russia established in 2011 – a joint project of Tsinghua University, SPbPU, Lomonosov Moscow State University, Moscow State University of Railway Engineering, and the Institute of Far Eastern Studies of the Russian Academy of Sciences. In China, according to her words, this project is of great importance – it is supported by the Ministry of Education.

"In recent years we have implemented many scientific and research projects with the Polytechnic University, - adds Wang Qi, - For example, our joint scientific project, confined to the 70th anniversary of the Victory, included a big conference. . Two special issues of "St. Petersburg State Polytechnical University Journal" (Humanities) were published both in Russian and in Chinese and also "Tsinghua Science & Technology", in which the articles of the leading Russian and Chinese researchers, devoted to the Great Patriotic War, were published." S.B. Ulyanova added that apart from scientific and research projects, Polytech and Tsinghua University have joint educational projects as well. In particular, the Institute of Humanities conducts summer schools devoted to studying the contemporary Russia with the participation of Chinese students; joint post-graduate programs are actively discussed.

Soon a Russian-Chinese collection, devoted to the conference "The Arctic: the History and the Present" will be published. Preparations are in full swing for two more joint projects: a conference to the 100th anniversary of the Revolution of 1917 (it will take place both in Tsinghua University and in Polytech) and also academic support of the New Silk Road project. "The idea of establishing the New Silk Road, which will connect China with European countries and strengthen cooperation with Asia and Africa, is one of the main strategic programs of China. The implementation of this global project assumes studying different aspects –economical, all humanities, and cultural – of China's interaction with the countries, in which the New Silk Road runs. For example, Wang Qi cooperates with the Institute of Oriental Manuscripts here in Saint Petersburg, studying documents, connected with economic relations between China and Russia in the time of the Jin dynasty. There are a lot of valuable archives, that allow connecting the tradition of the Old and the New Silk Roads, which is very important to China," – explained S.B. Ulyanova.

It should be noted that the research supervisor of the Institute of Strategic Partnership between China and Russia of Tsinghua University is academician Ni WEI-TOU. For the opening of the conference "The Arctic: the History and the Present" he sent a greetings letter in which he had expressed hope that this event would let discuss deeply and in detail the problems of Russian-Chinese cooperation in energy areas. Being a power engineering specialist and having defended a thesis in Kalinin Polytechnic Institute in 1962, Ni Wei-Tou himself with time has become a "power source" which is able to simplify solutions to many problems both for Polytech and for Tsinghua University. In 1991, for the great contribution into development of our universities he was awarded with the title of Doctor Honoris Causa of Leningrad State Technical University (the name of SPbPU at that time).

In conclusion we will give parts of the interview with academician Ni Wei-Tou, in which he told with affection and a great deal of irony about studying in Polytech, about what he remembers of his student years in the Soviet Union, and about how he had successfully filled up his wardrobe when he had come back to our country in the 1990's.

- Mr. Ni, when you came to study to the USSR, was it hard to learn Russian?

- When I came to the Soviet Union I didn't know a single Russian letter. I started to learn Russian in my first year in Moscow Higher Technical School. It was hard because our professor – Russian – didn't understand anything in Chinese. But for five and a half years of studying in MHTS I mastered Russian quite well; that's why, when I came for postgraduate of Leningrad Polytechnic Institute, I could easily communicate in Russian. Even two of my scientific articles in Russian were published in "Bulletin of Universities". 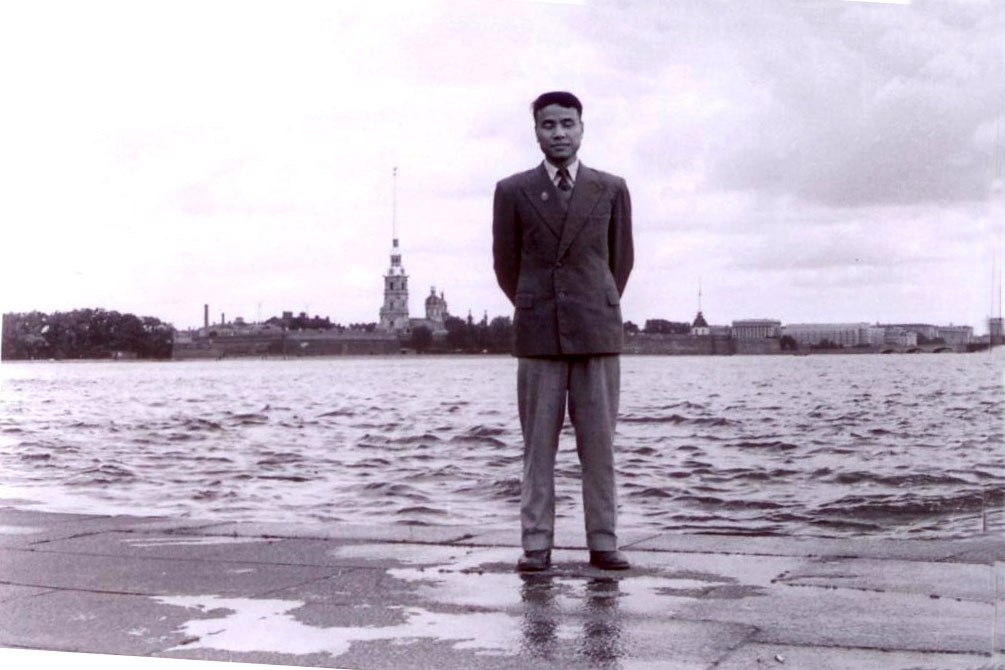 - Could you recall, please, how you got from China to Russia; was it a hard way?

- At that time by train only. From Beijing to Moscow through lake Baikal it took six days. And then by the train "Red Arrow" to Leningrad – it was very convenient, just one night. Last time I took a train through Mongolia and it was a very hard trip. 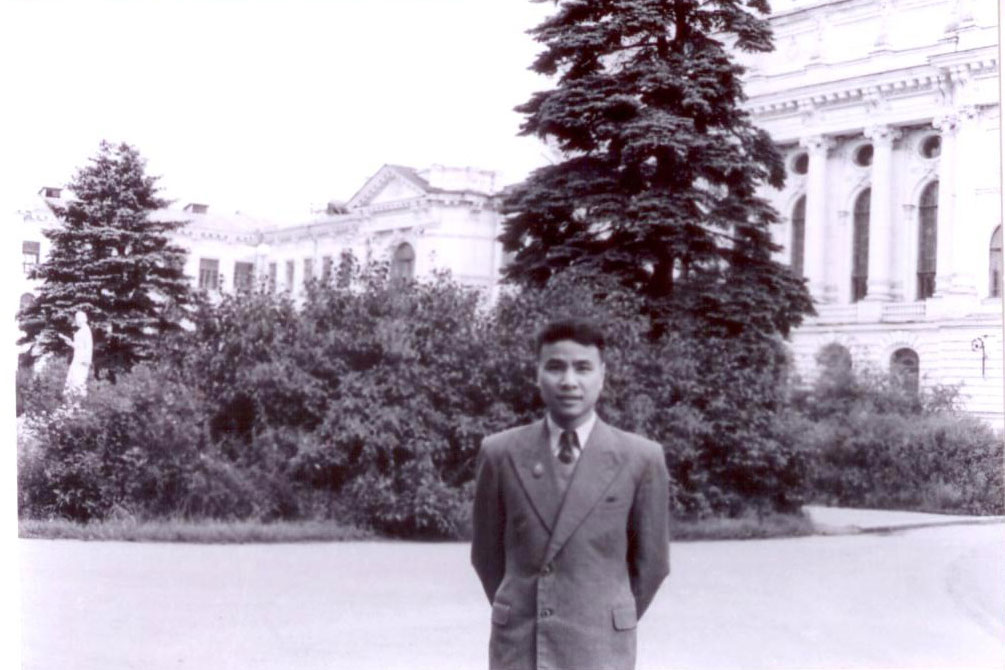 - Who was your thesis advisor? Was it difficult to defend your thesis? 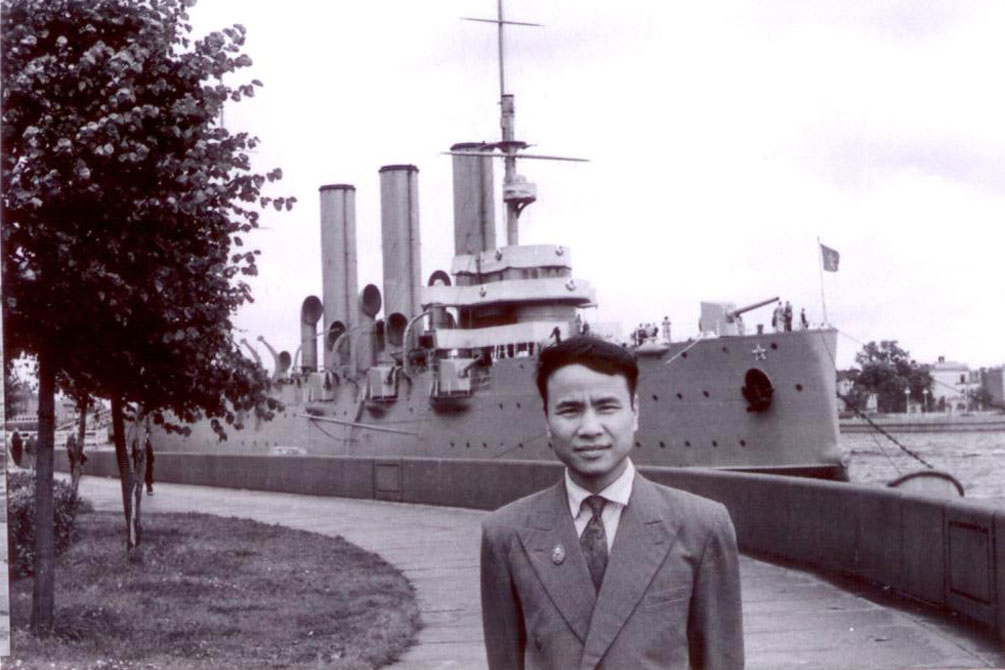 - Mr. Ni, tell us, please, about your life in a dormitory and what do you remember most?

- I lived in a dormitory of Leningrad Polytechnic Institute for post-graduates. It was situated close to our institute and you could get there on foot. I shared a room with a Chinese student but unfortunately I don't know what happened to him. My best friends were Valeriy Arseniev and post-graduate Ivanov, Kirillov's student. It stuck in my memory how in the dormitory we cooked dinner every day, for example noodles. To be honest, except for various "borschs", I did not like the Russian cuisine very much. But pea soup is not very bad and also shashlik. Although it was expensive for a student so we didn't eat it often. But the tastiest meal is sour cream. Unfortunately we don't have sour cream in China. But I remember how in my student years I used to eat a hundred grams of sour cream with a spoon of sugar every day. 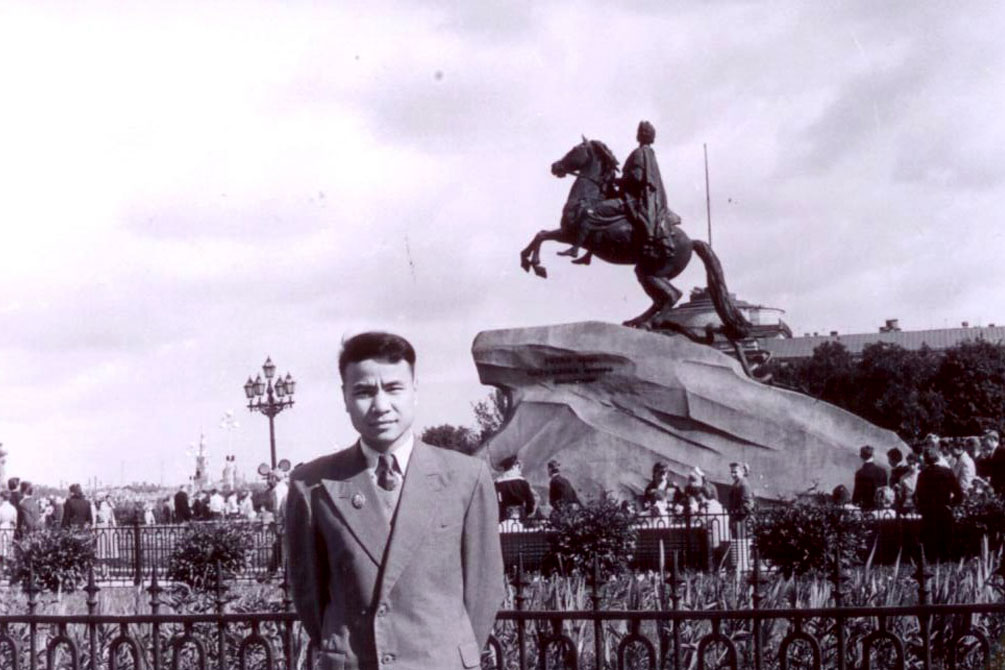 - And what did you do in your spare time?

- I did sports: track and field and weightlifting. And we also often visited the Winter Palace and the Summer Garden, walked along the Neva's quays, sailed in the Gulf of Finland.

- After studying in Russia you came back to China. Have you ever visited Russia again after that?

- Yes, in the 90's I came here on business trips for three or four times. Those were hard times for your country and I remember that there were little food and for 100 US dollars you could buy a coat for yourself, for your wife, and some suits. It was virtually impossible to buy food but post stamps were very cheap; I bought many then (laughs).

- Do you tell your students about the time you spent in the USSR?

- Oh, many times! I think there is not enough information about your country in books, magazines, and TV programs in China. Therefore students have always been interested in my stories about Russia.