New Year is not only magical time and presents, but also a reason to forget for a little about mid-term exams. At the end of a last week Higher School of International Educational Programs of SPbPU and the team of tutor organization 'Tutor Forces' hold a New Year party for international students of SPbPU called 'ELKA DIY'. 'Elka' means 'New Year's tree', and 'DIY' means 'Do It Yourself'.  No prizes for guessing that students had lots of workshops and activities. 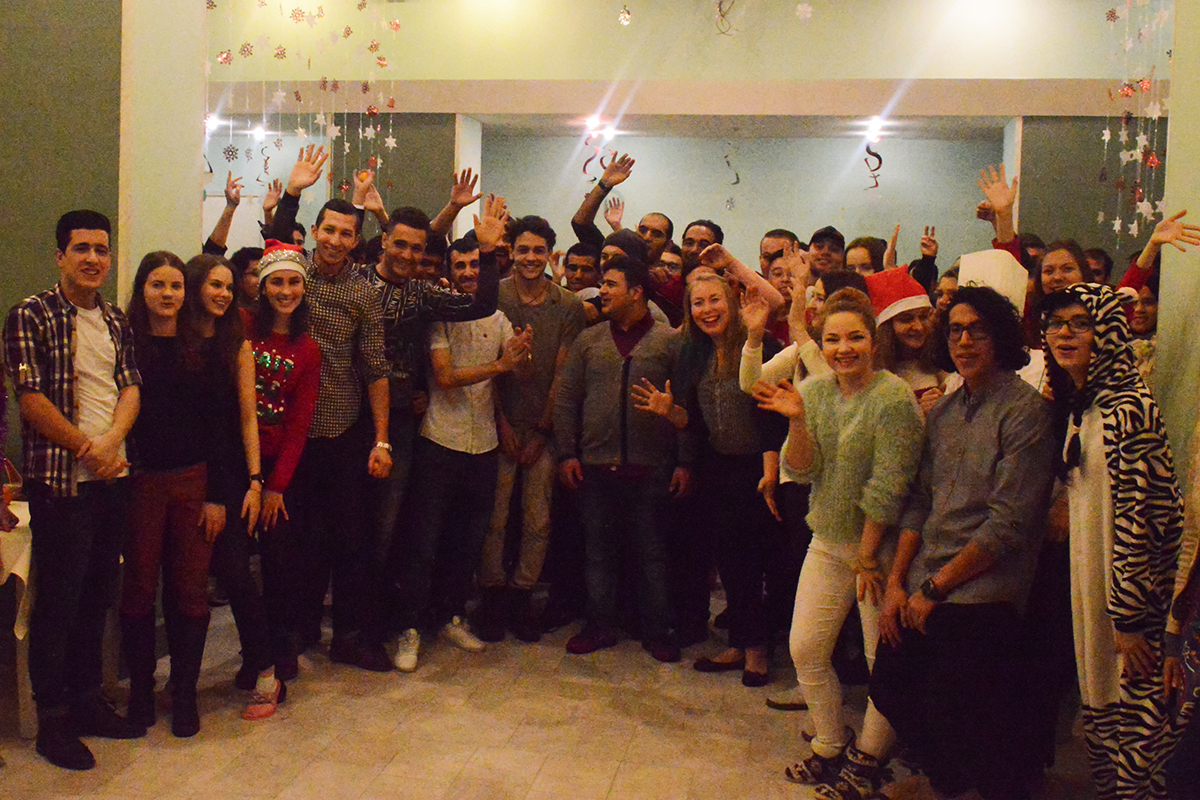 'New Year in Russia is tightly connected with tangerines and Russian salad (which is in our country called "Olivie"), the "Little Blue Light" new year's show and a Soviet romantic comedy television film "The Irony of Fate, or Enjoy Your Bath!", New Year's tree, which is decorated by all the members of a family, Father Frost and his granddaughter Snegurochka. We would like our international students to learn more about Russian New Year's traditions, and to enter into the spirit of this magical holiday', - says P. S. Nedelko, teaching assistant at the Department of International Students Training.

Guests were welcomed with tangerines and festal music. New Year's tree in the hall cheered everyone up. It is very well known that the main symbol of a New Year should not be decorated all by oneself, so everyone interested joined the decoration process. Finally the magic words were spoken: 'One, two, three! Shine, New Year tree!', and beautiful lights began to sparkle. Everybody found an attraction after his or her own heart: people were dancing, singing, cutting out paper snowflakes, or joined a cooking workshop. 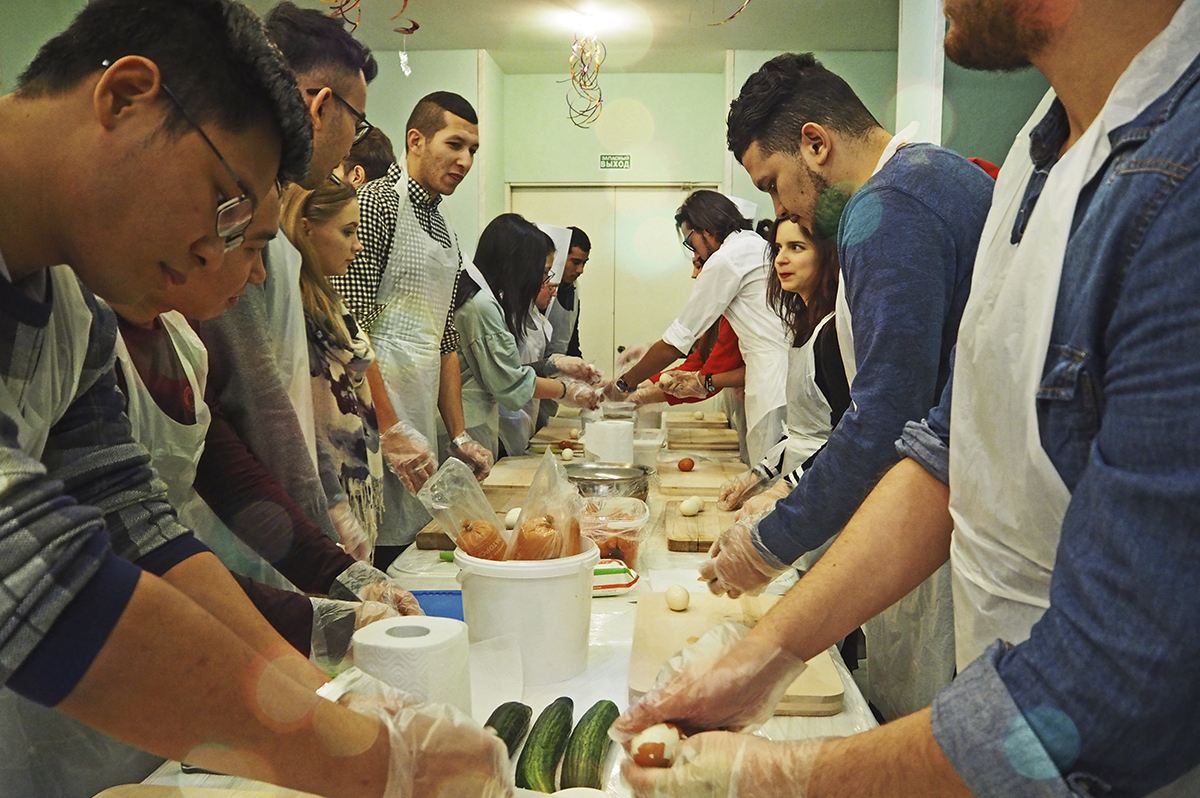 'We'll cook a lot of traditional Russian salad "Olivie" - everyone will try it!' - says tutor Ivan Ugrjumov. What is interesting, some students knew other traditional salads of Russia - for example, Christiane Licht (Germany) told that she liked dressed herring, and also knew how to cook it. 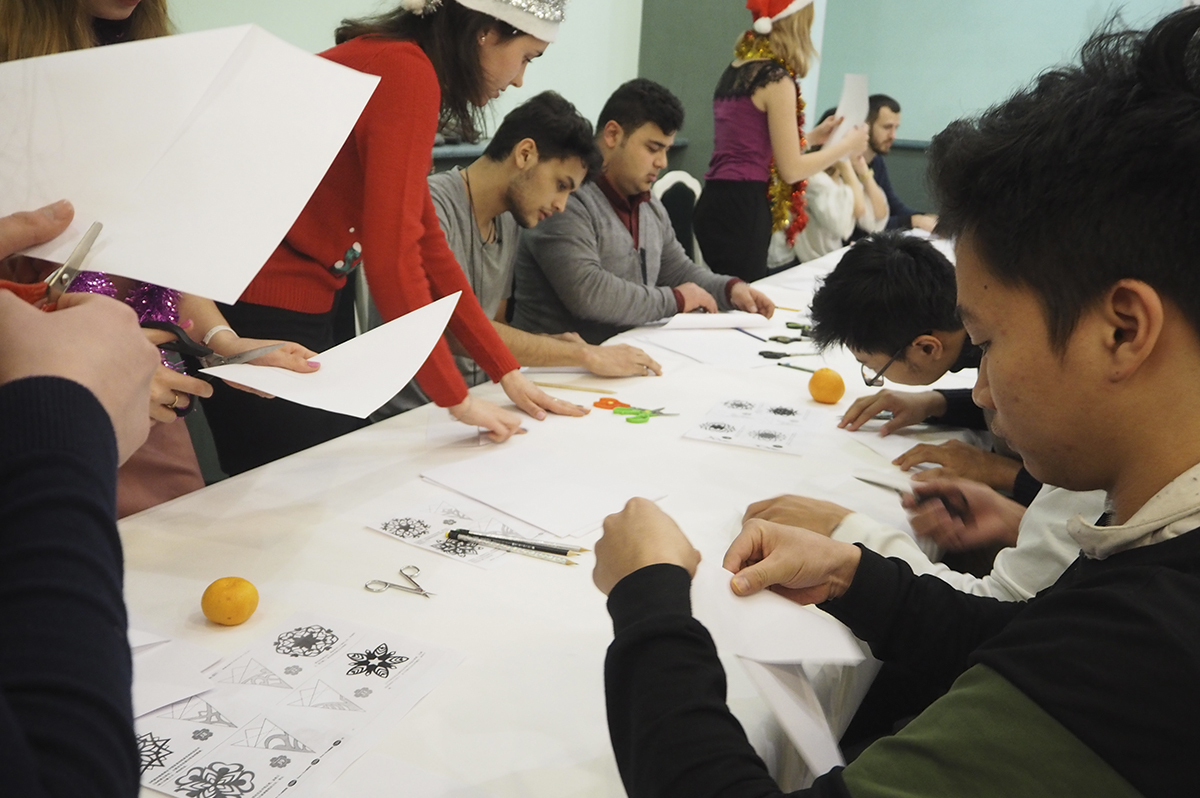 'Festive atmosphere, nice music, various activities and tasty food - I love everything! It's great that we have such events, which help us learn more about culture of another country. Now I definitely know, that New Year in Russia is a great fun! - says Benjamin Jaramillo (Latin America).

The Little Blue Light show also found itself at the party: the students sang, danced, and played their national musical instruments. At the end of the party a real Father Frost wished the students happy New Year, health, happiness, and successful exams. All that is lacking is to join his greetings: may 2018 turn your most cherished dream into reality!