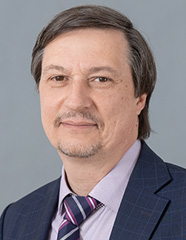 Dmitry G. Arseniev, DSc, Professor, graduated from the Physical and Mechanical Faculty of Leningrad Polytechnic Institute, the Department "Mechanical Engineering and Control" in 1986. In 1999 he got the scientific degree of the Doctor of Engineering. Since 1988, Dmitry G. Arseniev has been a University lecturer, in 1998 he became Professor of SPbSPU. In 1996 he took up the post of Director of the Institute of International Educational Programs at SPbSPU. In 2003 he became University Vice-Rector in charge of international activities and economic relations.

Control systems and adaptive numerical mathematics and mechanics are the areas of expertise of Dmitry G. Arseniev. He is the author of 200 scientific publications and 8 monographs. Dmitry G. Arseniev is a Full Member of International Academy of Higher Education, Member of St. Petersburg Engineering Academy, Member of Scientific Advisory Board for Physics and Applied Mechanics at the Russian Ministry of Education.  D. Arseniev is the Honorary Worker of Higher Professional Education of the Russian Federation, the winner of the RF Government Prize in Education, Honored Worker of Higher School of Russia.