Polytechnic University Opens its Information Center in the Republic of Mali

Polytechnic University continues its cooperation with the Republic of Mali. Today, September 19, a document on the establishment of an SPbPU information center in this country was signed. To conclude the agreement and discuss further cooperation, the Mali Minister of Higher Education and Science Research Aïchatou Foun Samak MIGAN has arrived to the University. 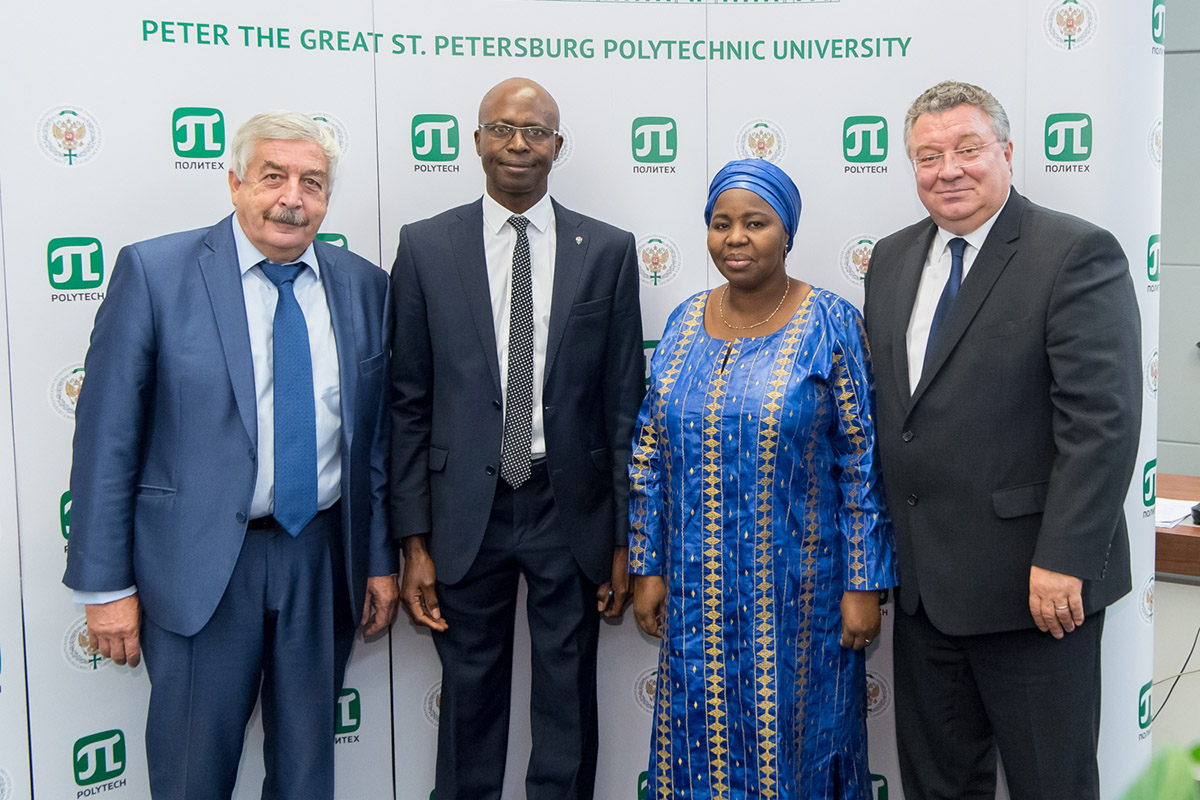 The Republic of Mali is one of the major states in West Africa. More than half a century ago, the Soviet Union had started cooperation with this country. “Since the time when Mali got its independence, no other country has helped us with scientific and technical specialists as much as your country,” Madame MIGAN admitted at the meeting. More than that, nearly one third of the Mali ministers appointed in the last 5 years are graduates of Russian universities.

“We want to continue this cooperation: to restore the old contacts and establish new ones. And the fact that you, Madame MIGAN honored our University with your visit, is an indication of serious intentions regarding the enhancement of the relations from the part of the Republic of Mali,” Rector A.I. RUDSKOY said. The Rector pointed out that there are such areas of study at the University which are on demand by the Mali’s economy; these include power production, construction development, telecommunications, IT-technologies, bio- and food technologies. The Rector assured that Polytechnic University takes matters of cooperation with high responsibility and seriousness. 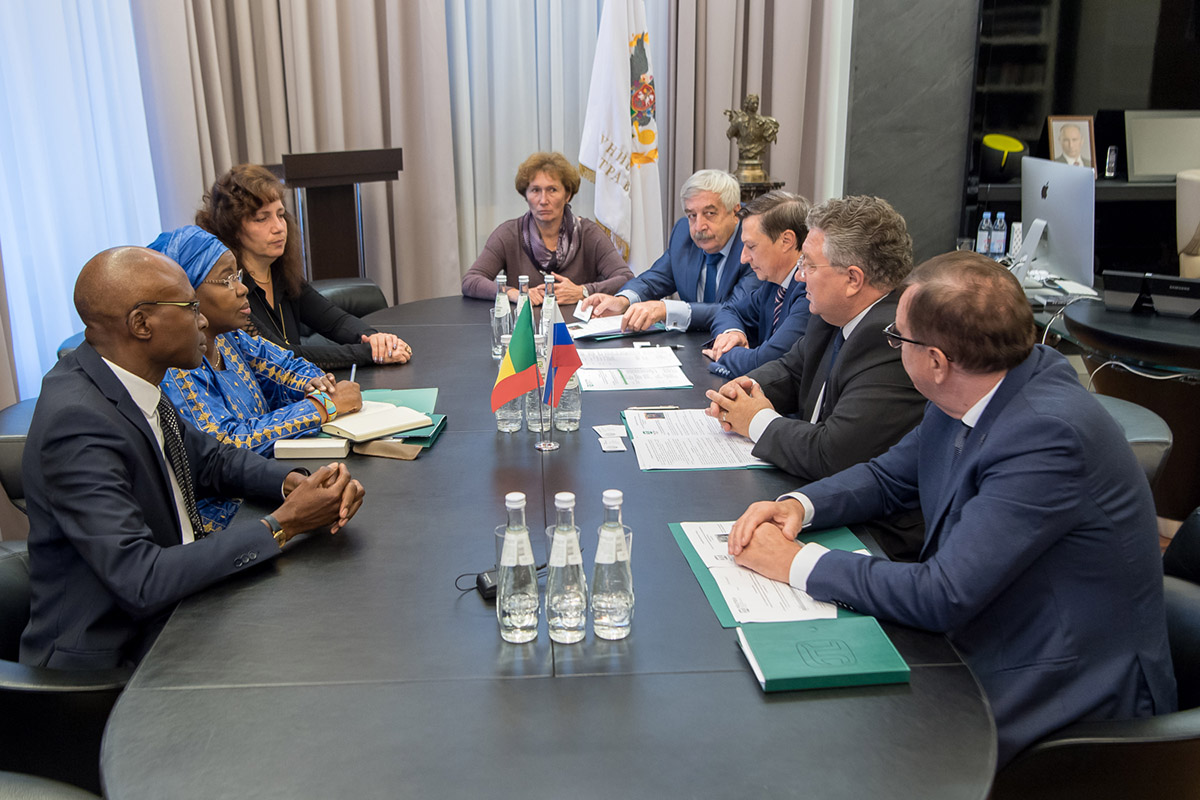 For the development of science in Mali, M-me MIGAN used to organize seminars and attract leading scholars to participation in them. One of such scholars is a native of Mali, who has tied his life to Polytechnic University but never forgot his motherland: Issa TOGO, Head of the Department of Water Engineering and Construction. He also took part in the today’s meeting.

The negotiating parties agreed that cooperation should not be limited with only science and education: it should be broader. In our days, knowledge is a commodity, and for that reason, cooperation should impact the both countries’ economic growth. As of the next year, students from Mali will come to Polytechnic University to study engineering and bio technologies; they will also take part in the International Polytechnic Schools. More than that, the Republic is ready to consider technologies developed at Polytechnic University for their implementation in the real sector of the Mali’s economy, while Polytechnic University, on its part, will provide for the personnel support for these projects.

After a tour around the Main Educational Building and visiting the leading laboratories, the Minister met with the university’s international services. The key topics for the discussion were the establishment of an SPbPU information center in the Republic of Mali and holding a “Week of the Russian Language and Culture” on the basis of one of Mali universities. Vice-Rector for International Relations D.G. ARSENIEV talked about the rich experience of Polytechnic University in organization of such events, which had a great success in China, Spain, and Vietnam.“ It is a true pleasure for me to offer specific things for our cooperation. A week of the Russian language and culture will be an essential and popular event, because there are many graduates of Russian universities in the Republic, and there is a whole Association of Russian Alumni. More than that, the Russian language is officially taught at 40 lyceums in Mali,” M-me MIGAN stressed. 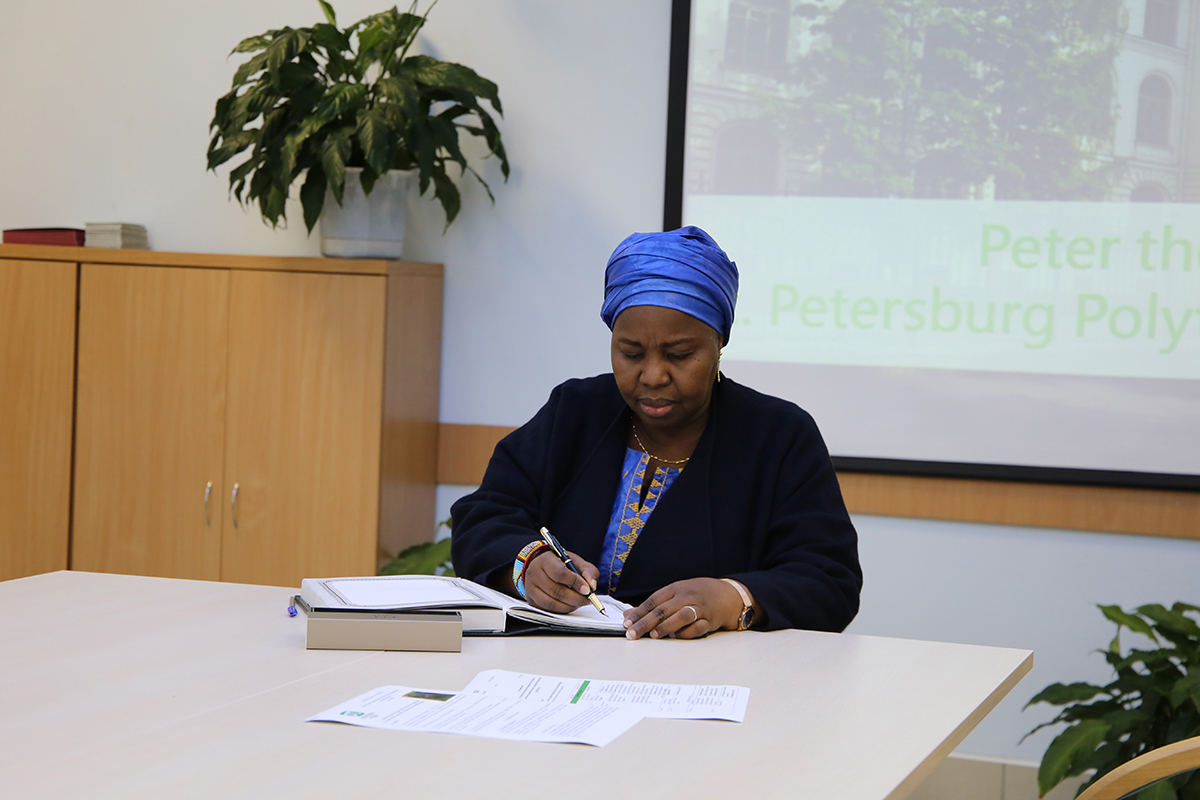 The Minister of Higher Education and Science Research of Mali also pointed out that the location for the Polytechnic University’s Information Center has already been identified. It is planned to establish it on the basis of the École Normale d'Enseignement Technique et Professionnel (ENETP). “Mali is striving to turn into a converging point between the Economic Community of the West African States and the West African Economic and Monetary Union and the Russian education, Peter the Great St. Petersburg Polytechnic University in particular,” the Minister stressed. This way, the new SPbPU unit will become a key link through which students from Mali and other African countries will be able to get accurate and timely information about the educational options in Russia, particularly, about getting scholarships which many African states allocate to their students for study abroad.

The business program of the Minister of Higher Education and Science Research of Mali was concluded by negotiations with representatives of the Civil Construction Institute and the Higher School of Biotechnology and Food Technology. The parties discussed the possible educational options for internships and study of Mali students in short-term SPbPU educational programs, vocational training and professional development of university teachers from Mali, and the development of special educational programs for the faculty of Mali universities.