On September 1, Polytechnic University honored its heroes - volunteers who showed dedication during the pandemic and helped students solve a variety of issues. Young men and women from Russia, China, Kazakhstan, Azerbaijan, Vietnam, Djibouti and other countries received certificates of thanks from the Rector of SPbPU, Academician of the Russian Academy of Sciences Andrei RUDSKOI. The ceremony took place at the Resource Center of the SPbPU International Campus. Vice-rector for international relations Dmitry ARSENIEV addressed the volunteers on behalf of the university administration.

“From the entire university, we want to express our deep gratitude to you for the invaluable work that you have done. The Polytechnic University fully supports its students: since the first days of the pandemic, online training was promptly organized, all students of the university received material assistance, but we would never have coped without such active guys like you. It was you who helped with the delivery of food to the dormitories, provided moral support to other students, and promptly shared important information. You showed yourself as real Polytechnics, and showed how strongly the strength of mind, dedication and solidarity of students from different countries are developed at our university,” noted the vice rector. 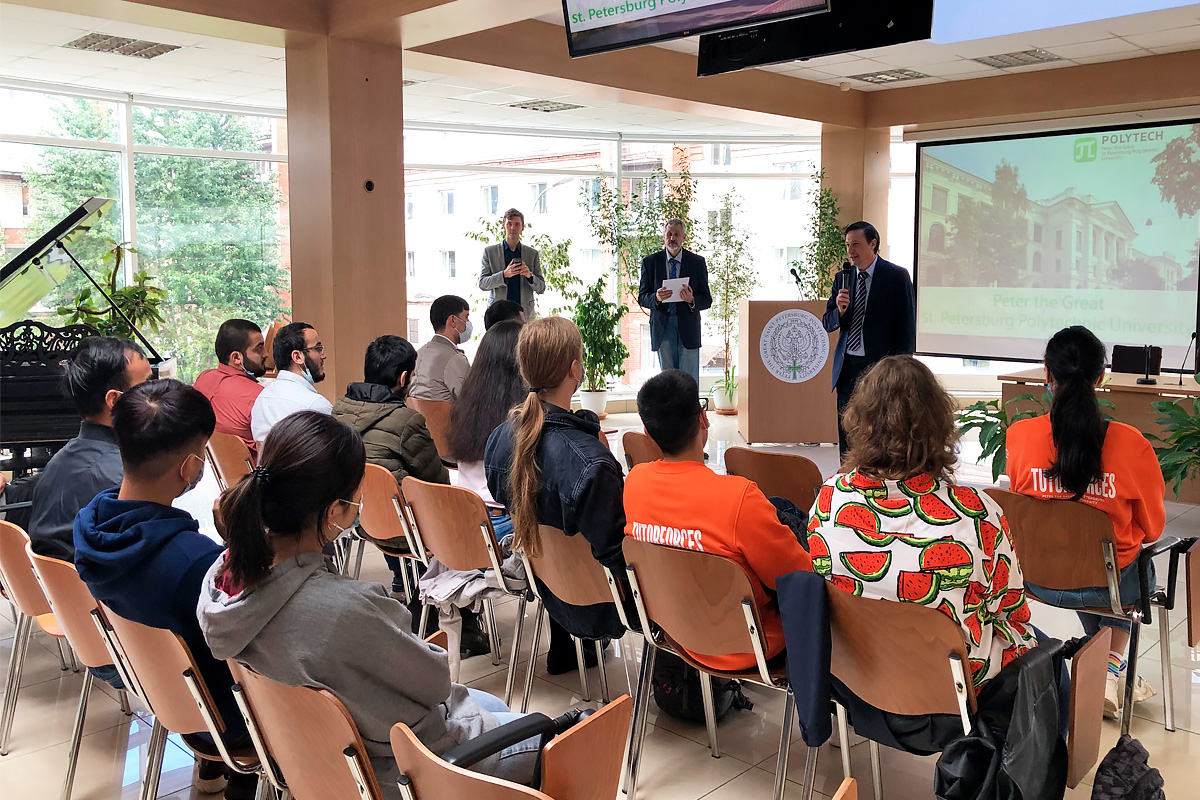 In May 2020, one of the SPbPU dormitories in accordance with the decree of Rospotrebnadzor temporarily turned into an observer. For over three weeks, entry and exit from the building was prohibited for all residents. Volunteers from Polytechnic University helped deliver food and essential goods, quickly disseminated important information, and morally supported their neighbors. So, activists from the international student club PolyUnion did not stop their activities for a day: even in the distance format, the club kept on working. On its virtual site, classes in foreign languages and film evenings were held, flashmobs and various activists kept going,  and also an advisory center was organized, which provided advisory support to foreign students so that they could correctly prepare the documents necessary to receive financial assistance from the university.

“When the observation regime was announced in dormitory #13 of Polytechnic University, I could not stand aside. For a long time I was the chairman of the student council in this dormitory; it practically became my home. I just couldn’t leave it at the moment when it needed help the most. We solved a variety of tasks: from organizational issues to interaction with the administration. There was a lot of work: sorting the products, treating them with disinfectants, handing them over to the students who ordered them, remembering the important rule – to avoid crowd behavior and serve no more than 1-2 people at a time ... It was not easy at first to form all this logistics; none of us had ever done this before. But by the end of the first week we understood the whole picture, and in the following days worked clearly and smoothly. We understood that we were doing this for a reason, for the sake of our neighbors, for the sake of our second home. This difficult period brought the students together even tighter. We realized that it would be possible to get through this quarantine only together,” the head of the SPbPU volunteer group Alimzhan ZAMANBEKOV conveyed his piece of advice to people who want to become volunteers: “The main thing is to have a desire. If you sincerely want to help, then sooner or later you will come to the volunteer movement.”