Polytechnic University improved its position in the RUR reputation ranking

“An important factor in decision-making in such an issue as admission to a university is its brand... And since our reality is the world of brands, their struggle for minds and talents, the issue of assessing the impact of brands naturally arises. It is for this purpose that a separate reputational RUR ranking, i.e., the Reputation World University Ranking was prepared, published on September 8 by the RUR Ranking Agency together with the international company Clarivate Analytics,” the report says. This ranking is based on two indicators: the reputation of the university in the field of teaching and research. (The general RUR ranking  is based on 20 individual indicators.) Peter the Great St. Petersburg Polytechnic University ranked 273 in the RUE reputational ranking  (+50 positions as compared to 2019), and among Russian universities it ranked 9th (out of 82 participants).

In this ranking, the majority of Russian universities show positive dynamics, which is primarily associated with the directed state policy to form and strengthen the reputation of Russian science and higher education in the international community. This is especially evident at the example of universities participating in the 5-100 Project, focused on increasing the global competitiveness of the Russian system of higher education and science. This year, five participants of the 5-100 Project entered the top 10 of the RUR reputation ranking, and 12 universities participating in this program are in the top 20.

Being an important platform for holding international conferences, SPbPU organized events to attract recognized foreign representatives of the academic community and industrial partners. In 2019 alone, St. Petersburg Polytechnic held more than 20 conferences with mandatory involvement of young scientists and foreign colleagues. For example, we have successfully held a conference with a well-known foreign partner Nature Plasma Physics. “Our scientists take part in Mega Science projects,” commented the head of the SPbPU Department of Strategic Planning and Development Programs Maria VRUBLEVSKAYA. “They are members of major international industry associations, members of the editorial boards of highly cited world-class scientific journals. In addition, St. Petersburg Polytechnic University is broadly known as the leading technical university in terms of the number of foreign students. We actively invite foreign professors to teach on our international educational programs, we send our students and staff to ERASMUS + academic mobility programs, and we are leaders in Russia in terms of the number of programs in which we participate. Over the past 5 years, we have opened a representative office in Shanghai, China, and an information center in Madrid with a focus on the Spanish-speaking audience. Our International Polytechnic Schools has reached an impressive scale and forms a positive image in the educational environment. All this strengthens the position of Polytechnic University and the reputation among researchers and teachers in the world community.” 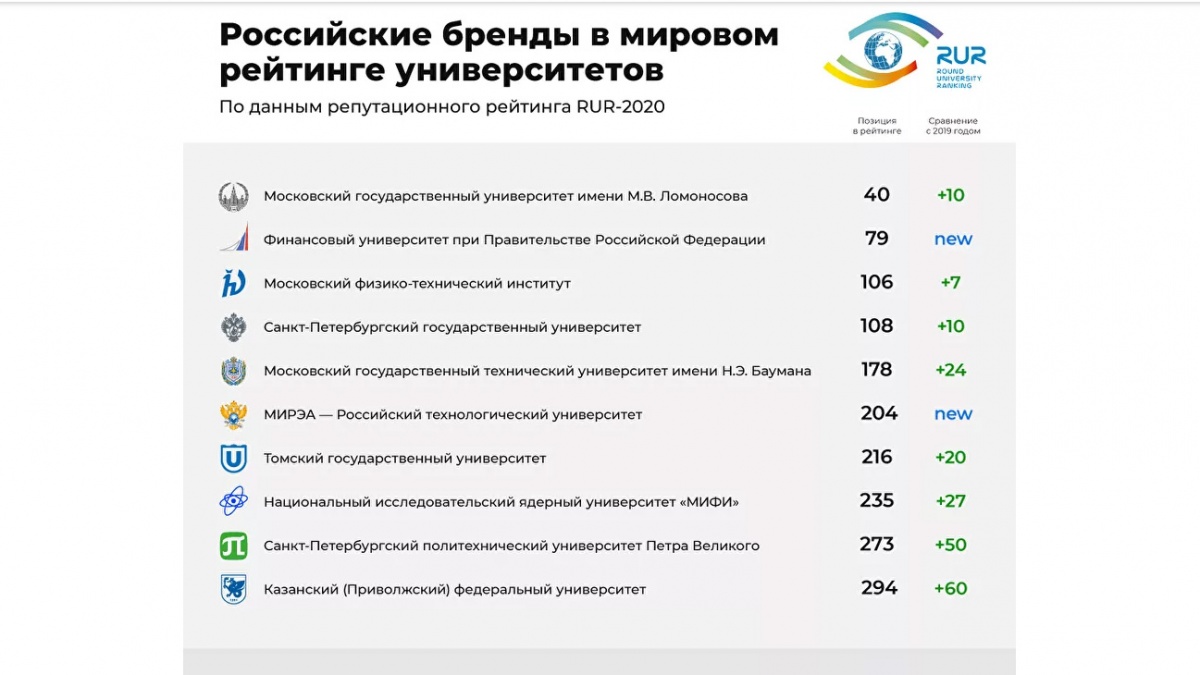 Round University Ranking (RUR) is an international university ranking published by the RUR Ranking Agency together with Clarivate Analytics. The rating has been evaluating activities of 1,100 leading universities from 85 countries of the world for over 11 years (2010-2020); it takes into account 20 indicators that measure four areas of university activity: teaching quality, research quality, internationalization level and financial stability. In addition to the overall ranking, the RUR ranking includes 30 rankings in six subject areas: humanities, life sciences, medical sciences, natural sciences, social sciences, technical sciences.