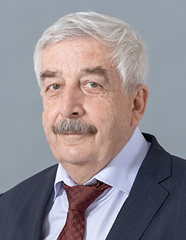 Vladimir V. Gloukhov graduated from Leningrad Polytechnic Institute in 1970. He received his Doctor of Engineering Degree in 1981. He has been the head of the Department of Economics and Management for Technologies and Materials since 1988. From 1995 to September 2011 he was the Vice-Rector for Academic Affairs of the Polytechnical University; in September 2011 Vladimir V. Gloukhov was appointed Vice-Rector for administrative and economic activity. In February 2015 he was appointed the first Vice-Rector of the University.